The Off-Broad Street Players are back in full swing as students begin to start the 2018-2019 school year. On Tuesday, September 4 and Wednesday, September 5, those interested in being a part of the drama department tried out for the school’s future fall productions: The Real Princess and the Pea and A Midsummer Night’s Dream.

The audition process has been the same for years now. Students are asked to meet in the PAC directly after school, where the play’s directors introduce themselves and have a brief discussion about the shows. The students are then given ten minutes to form a group and go over how they will perform the lines they were handed. This year, students auditioned by reading a section from A Midsummer Night’s Dream.

“Whether you make it or not, auditions are always fun,” says Lauren Claxton, 10. “You get to put yourself out on stage and get your moment to shine.”

Claxton has had previous experience with being a part of the drama department and has undergone auditions, which many consider to be the “roughest part” of casting. Although there were others who had no idea of what to expect, some were able to express how they were feeling during the process.

Taylor Nagy, 12, shared, “I’m really nervous, but also really excited. It’s a whole new experience for me; it’s very outside my comfort zone, but I really want to make the most of my senior year.”

After the auditions took place, the directors had the chance to sit down together and decide on who would make the cut. Those who made the plays were announced last Friday.

“I’m so excited to do this show!” says Alyssa Aey, 10, who was cast as Hippolyta in A Midsummer Night’s Dream. “I think it’s a great cast and I think it’s going to be a great time. When I found out I got a role, I was so happy.”

Skylar Barnett, 9, did not get a role, but rather than taking the decision personally, she said that she would take this experience as a lesson.

“I’m not sad at all,” says Barnett. “It was more of a learning experience.”

Not everyone who tried out was casted, but those who didn’t make it were still encouraged to try out again by the directors.

“It’s always really disappointing to see the people who didn’t make it in a drama production,” says Leigh Hillegass, 11. “But in the end things work out, and I can’t wait to see how well things will work out for our upcoming plays.”

The Real Princess and the Pea will be performed in the PAC November 1-3 and A Midsummer Night’s Dream will run December 6-8. 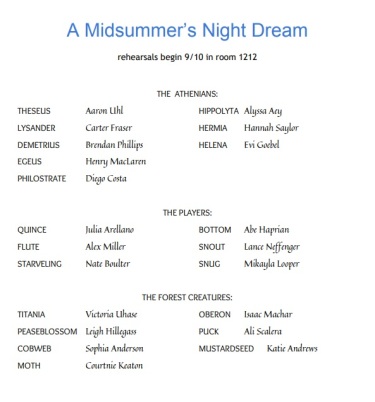 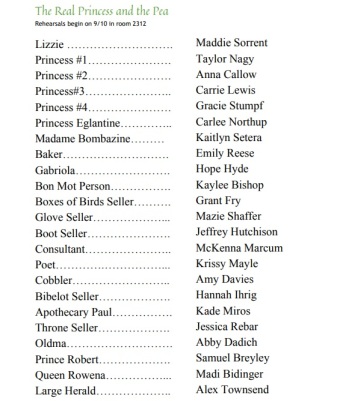