The annual senior Prom and after prom ceremonies were held in Wadsworth on Saturday, May 13 at the Galaxy.

The events of the day started with the Promenade, hosted by Mr. Knapp, started at 5:30 and was broadcasted through WCTV. Couples walked across the stage to show off their outfits and their dates.

“It’s like a nice little reunion, you know?  It’s nice to get everybody together for the last time,” said Mr. Jason Knapp.

Shortly after Promenade, the fun continued at the Galaxy’s banquet hall. Dinner was served and music blared through the speakers. The dance floor was packed and couples flooded through the door.

“The dance was very fun, they played a lot of good songs, the lights were really cool, and the food was great,” said Brooke Burton, 10. 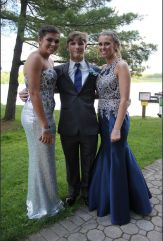 Even after the dance ended, the party was still far from over.

For many, the real fun began after the dance. Post-Prom, held at the middle school, lasted until the very early hours of Sunday morning. The theme for this year was “The World Awaits” and decorations consisted of various tourist attractions from around the world.

There were activities ranging from cornhole tournaments to a surfing simulator. Aside from playing games, students had the opportunity to win tickets they could later redeem for prizes. At the end of the night, students walked away with a t-shirt and a bag with this year’s logo to serve as a souvenir of the night.

While there were many underclassmen and a few alumni in attendance, this was the seniors’ night to celebrate. Wadsworth High School’s Prom provided a safe night for everyone to enjoy and allowed seniors to get together one last time. And for many, there was nothing like a 9 hour long celebration to celebrate the end of school.