The story line of Pitch follows a teen by the name of Ginny Baker, (Kylie Bunbury), as she climbs the ranks from high school baseball to the Major Leagues. She makes history by becoming the first women to ever pitch in an MLB Regular Season Game. 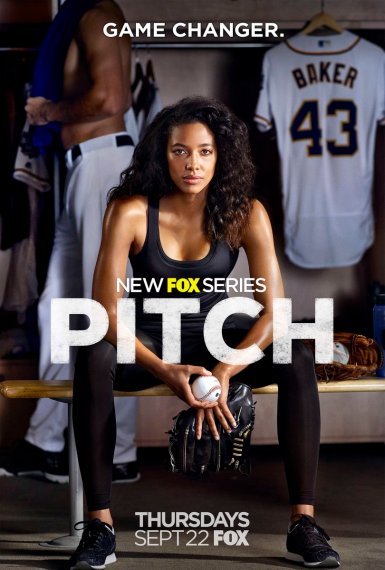 In the first episode, she struggles to adapt at first. She deals with the adversity of both a strangling media presence and non-supportive teammates.

In her first start, she battles mightily, walking several batters before she is taken out of the game. The worst part is that she is the one who makes the choice to be pulled out. She doesn’t even make it out of the first inning.

Her father comes to her hotel and demands that Ginny grab her glove and throw to him. Getting back to work after the terrible outing proves to be the magic button. After throwing a bullpen session to her father, and the appearance of a dramatic flashback, she appears ready to go.

In her next start, she starts off a little shaky with another wild pitch. Then the catcher, played by Mark-Paul Gosselaar, comes out to the mound to calm her down. He proceeds to give a great speech which allows her to throw a great game.

Ginny overcomes all the pressure and succeeds against all odds. After the game, she returns to the field, and her father appears. They talk for some time, but when the camera pans back, he is suddenly not there.

The idea of the show is that the audience watching feels like a fly on the wall experiencing these historic events unfold in front of them. When she experiences the skepticism and discrimination that goes along with her pioneering journey, she perseveres onward.

“I like Pitch because it shows that with hard work, anybody can achieve anything, even if somebody doubts them,” said Cuyler Adams 10.

The audience get so drawn in, they almost feels the need to cheer her on through all her challenges, which is thanks to a great cast and crew.

The whole story is not only about the game of baseball and all of its complexities; it is also about growing up as a person by going through multiple challenges and coming out the other side victorious.

“I believe that this show is a realistic idea, because baseball has proven that someone does not have to throw 95 MPH to get someone out. As a former pro player, I believe that if they can compete at that level then they should be allowed to play,” Mr. Klafczynski said.

Pitch brings to light controversial issues that also happen to only make it more engaging to the audience. This show has had great reviews from its’ viewers and it airs every Thursday at eight P. M.